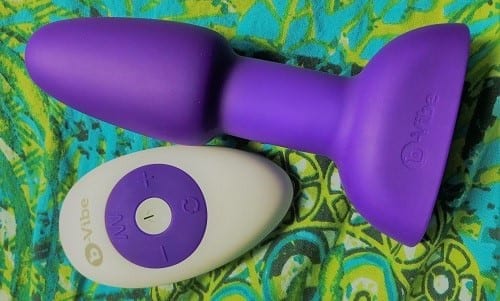 These balls/beads in the neck of the plug really roll around, changing the shape of the silicone coating as they pass by. The beads can be activated in one half of the neck or the other, or both at the same time for the full spinning effect. And not only can you alternate which rotating beads to use, you can pick between three “steady” settings and six vibration patterns—all of which you can increase the intensity of.

As you can see, the controller has a lot of buttons to press! 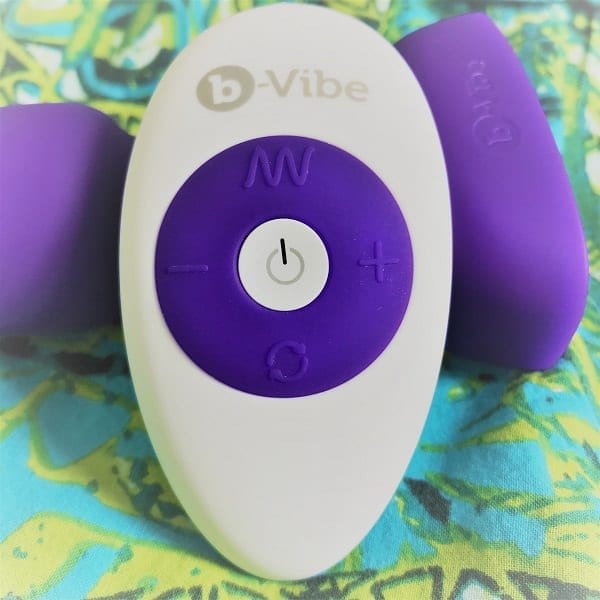 First, obviously, the remote makes it so incredibly much simpler to cycle through all the pattern + intensity options while the plug is in my ass. No reaching backward and trying to find the right buttons.

I sat on the edge of my bathtub and decided to see just how much of the length I could fit. Though I was working at cross purposes with the chunky base, I had no problem inserting the top half of the base. The bottom half sticks out a little but is surprisingly comfortable when it sits wedged between my inner labia. And then I started experimenting with the handheld remote, and the fireworks began.

Now, I can’t always replicate this effect.4 (And I’m certainly not promising that you can, since individual anatomies are so different.) This was a fairly sensitive day for me. But god was it good.

The remote control offers so many options!—but easy to use. This option is great if you want to let your partner control your pleasure.

As much as I enjoy the plug, you may not like it if you prefer steady vibrations, need a very long battery life, or want a super-duper quiet toy.