Oh HELL the Vedo Suki is strong! I own a literal drawer full of air pulsation clit toys, from Womanizer to Satisfyer, from Melt to Lelo Sonas & more—and this one. Oh my, it’s no joke. The pulsations are stronger, harder, than the Lelo Sona 2; the mouth is tight and suction-y; and my clit is almost under assault by Suki’s power. Suki also has a finger grip, which is neat!

The Vedo Suki is both (relatively) affordable and…not for the beginner, I’d say. This is a clitoral toy for anyone who knows they yearn for strong stimulation. It’s focused, it’s pulsing, it’s drawing the clit into its mouth a little.

So do you like it strong? Suki could be a great friend. It’s like the Doxy wand of clit “suction” pulsators: powerful to the point of being abrasive if you are a sensitive user.

I’ll review the Vedo Suki’s intensity compared to similar clit pulsation toys. (Spoiler: It’s closest to the Lelo Sona 2 “SenSonic” toys, but actually: stronger especially on low, cheaper [$61 vs. $99 for Sona 2], and easier to hold.) I’ll tell you what I can about my experience, then give a few caveats about clit size, because Suki is meant for most but not all clitorises.

So I was expecting some power from Suki. NOT THIS MUCH, though. This pulsing power, undergirded by a vibrating effect. Suki imitates the SenSonic technology of the (higher-end) Lelo Sona 2 suction stimulators. It’s not only air pulsation (like Womanizer and most Satisfyers), it’s vibro-pulsation. And it sucks the clit inward a bit more too, than a Womanizer does.

I redid my Womanizer vs. Satisfyer vs. Sona strength chart: where the rightmost side represents “most strong,” and every dot represents 1 function in each toy shown. Look down toward the bottom for Suki:

As you can see, Suki is way to the right side. This means: Suki has no low intensities (in the steady speeds, at least; only in the beeping patterns2). And so, the Vedo Suki is the most powerful clit stimulation toy I own, out of the best ones being produced in 2020.

Before, my guide had rated the Womanizer Premium and We-Vibe Melt both a 10/10 for highest strength. Now, I’ve had to up the numbering game, to give Suki an 11/10. It’s like when I was forced to do the same after I got a Doxy (Die Cast) Wand, because I’d been ranking the (Hitachi/Vibratex) Magic Wands 10/10 for power—but Doxy plug-ins deliver more strength.

The Vedo Suki has 6 speeds / intensities (I use those words interchangeably). And that’s for each of its 10 functions: so you have 1 steady function with 6 speeds, then 9 patterned functions with 6 speeds. And these aren’t only your traditional vibe patterns, but also these really weird little beeps and bloops and blips that I’ve never heard a sex toy produce before.

In this way, the Vedo Suki also reminds me of Lelo Sona, because Sona was the first clit pulsator (= suction stimulator) with patterns, besides steady pulses of air. But Suki’s patterns are more…hmm… “sonar-like” than the Lelos. I kind of feel like I’m traveling in a submarine when I hear a few of them. That’s between the spluttering noises that Suki’s energetic pulses emit on most patterns.

This is one positive new thang: Suki’s finger grip. No Womanizers or Satisfyers have it!

Why’s that matter? Well, first, Suki’s body ends at its mouth. (Kind of like the We-Vibe Melt, but the way Suki curves around my mons isn’t quite as ergonomic.)

In any case, nothing is sticking out behind Suki’s mouth; nothing is blocking space between the clitoris and vagina. That’s helpful if you’re aiming for simultaneous vaginal penetration, especially if (1) you have a short clit-to-vagina distance (so space is precious) or (2) you’re doing it with a penis that could smack into the toy.

So if you can take Suki’s power, the body shape and the finger grip both lend themselves to use during partnered sex.

The grip here is a raised ridge right down the center of Suki’s back, with an oval in the middle to really hold your fingers in place. My fingers do fit into it very easily, and it’s open on both sides so that wider fingers can rest comfortably too. On a side note: The shape kinda makes me think of an iron!

At first test, I was slightly disappointed that the grip didn’t angle to the side, like at a 45-degree angle, to accommodate the angle of my right hand. Then I realized that this would leave lefties out in the cold.

Honestly, Suki testing has been a sucky experience for me in multiple ways.

I’ve heard from a couple toy users that the We-Vibe Melt (which I honestly believe is the best air pulsation “Womanizer” toy being produced) was too strong for them. And Melt seems strong when you turn it on, since it’s on its fourth intensity level already. Dial it down to speed #1 or #2, and I start to enjoy those thuddy, half-sucky pulses. Then I move up. And it gets better until it is, indeed, too strong on intensity #7 or 8 for me. (Out of 10+.)

Air pulsation stimulators can be an adjustment in general. It’s a really novel sensation, the focused clit-blowing! And if a few users find Melt overpowering… Well, they sure haven’t met the Vedo Suki yet.

Suki is something like the Lelo Sona 2 Cruise on speed (but at least without irritating random intensity changes when you’re on the steady function).

I waited through one, two, three full hormonal cycles for my least sensitive part of the month (around PMS). Every month, I hoped I’d finally be able to use this device, really come with it. Because it’s so strong. Should be good, right?

Oh lordy! I finally decided me the Vedo Suki were a lost cause orgasmicly, and I’d leave Suki for more die-hard-clit-focus power fans.

I’ll tell you what I can about the speeds: the higher ones are a mystery 🔎 to my clitoris.

I’ll start with first function out of 10: the steady one. Remember, each function has 6 possible speeds, so 60 possible combos. This first, steady function’s first speed—the lowest amount of consistent power the Suki can produce—is as strong as the Womanizer Liberty’s top speed, and Liberty’s not a weak toy.

Suki’s raucous. I’ve also heard newbie toy buyers say that my favorite We-Vibe Melt was loud: but again, clearly they hadn’t experienced any wand vibrators OR the Vedo Suki. Just another way that Suki is like the Doxy wand of clit suction toys: loud, super-powerful, and not for the sensitive.

Suki’s first steady speed ranges from 48 to 55 decibels (dBs), measured from a foot away. The sixth and highest steady intensity ranges from 52 to 60 decibels normally. And if it’s not perfectly positioned, you hear bursts upward in noise level. I consider toys over the low 40 dBs “not quiet” and toys over 50 “getting loud.”

This is wand-level noise: it’s simply the nature of a very powerful toy to be noisy, so I don’t fault Suki for that. But it’s something to understand if you don’t have experience with other power-motors.

And the patterns. Lots of them, nine. I personally get annoyed if a toy has more than 5 patterns: 5 seems like enough to navigate, because you do have to cycle through the functions in Suki by pressing the power button. Since all three control buttons are lined up next to each out, I have to be careful I’m not upping speed when I’m meaning to flip between patterns.

There is one function that makes me feel like I might come. Like a clitoral orgasm could happen for me. At some point. Perhaps. I can’t remember what number function it is, I just keep pushing the power button until I find the one that’s not too strong on low.

And the Vedo Suki’s sonic resonance is fascinating—in theory, unfortunately, as I still haven’t come on this vibro-pulsator. It’s so spluttery! Then, sometimes, on the lowest speed or two, Suki isn’t actually pulsing air out… it’s emitting blippy sonar-like bursts.

Overall, the Vedo Suki is mainly an intellectual curiosity for me. A very novel novelty. A valiant effort, perhaps; but this challenger has not won over my own selective (and sensitive) clitoris.

Clitoral toys are not one-size-fit-all because our bodies are different. You wouldn’t expect one penis pump cylinder to fit every dick, would you?

It’s the same for people with large clitorises. If yours really sticks out (more than half an inch), or is thick, the Vedo Suki is not sized for you. It’s not likely to be comfortable. The Satisfyer Pro 3 Vibes flexible hole, then the Satisfyer Pro 2 NG’s firmer mouth, have more ample holes.

Also keep in mind that the more focused clit pressure is, the more intense it may feel—like how the Lelo Sila’s new, expanded hole (upsized from the Lelo Sona 2) makes the vibro-pulsations seem less BAM! because they’re more diffuse (spread out) even though in hand, I’d swear Sona 2 and Sila have the same motor.

The inside of the Vedo Suki’s “mouth” is approximately a third of an inch tall (top to bottom) by 0.4 inches wide (right to left), and approximately half an inch deep in the pulsing channel. Average (=median) clitoral size, if you’re wondering, is 0.13 inches wide (with deviation up to 0.17 inches); by 0.2 inches long (with deviation up to 0.26 inches) long, according to one study with 200 participants. (So the clit is longer than it is wide.) Obviously, big deviations are possible from this average. Suki will be more than accommodating enough for most users, but again, will not fit all—just like how any individual with a large penis will need to know that when buying a closed-shaft vibrator or even a soft penetrable.

Suki’s mouth feels nicely secure for me (if I wasn’t overwhelmed by Suki, at least?), but your sizing may vary.

Remember to always use lubricant with a clitoral pulsator, as it’ll reduce friction. Simply Aqua Jelle is my current favorite for clit and/or vag play (that doesn’t involve hard-core thrusting, where I’d pick a hybrid lube instead).

The Vedo Suki is waterproof, and USB rechargeable, and the price point is great. (That is, if you’re a super-power fan.)

It comes in the royal purple featured in this review, and in a cute turquoise. Both those colors are a smooth silicone, with a hard ABS plastic accent (in metallic silver) around the back side.

It’s got a travel lock too: you press the power button twice fast to turn that on or off. To power Suki’s pulses (and beeps and bloops and lawnmower noises) on, hold the power down for 3 to 5 seconds.

The intensity-change buttons are simple to figure out: the + and the – to either side of the power button. Just be careful not to change function accidentally while you’re trying to adjust the speed! The buttons are inset, not raised and separated, so it’s easy to mistake one for another.

This Vedo Suki review has been a tough one to write, because I think the toy has strong (❗) merits but is honestly strange in several ways. And I’m not sure how many people this kind of “strange” will work for.

It’s the strongest “clit suction” toy I own, of over 20 big-brand stimulators. It does not have gentle steady speeds you can warm up with. The Vedo Suki is for the person who knows they want to start with aggressive stimulation. Above and beyond. If you’ve got a Lelo Sona, and you love it, then do check out Suki. If you’re not sure…then try a Womanizer Starlet 2, a Womanizer Liberty, or a Satisfyer Pro 2 NG.

The finger-grip feature in Vedo Suki is highly useful, and I’d like to see it in another clit-suction toy … with lower intensities.

Save 10% ⬆️ by entering code FELICITY at checkout. 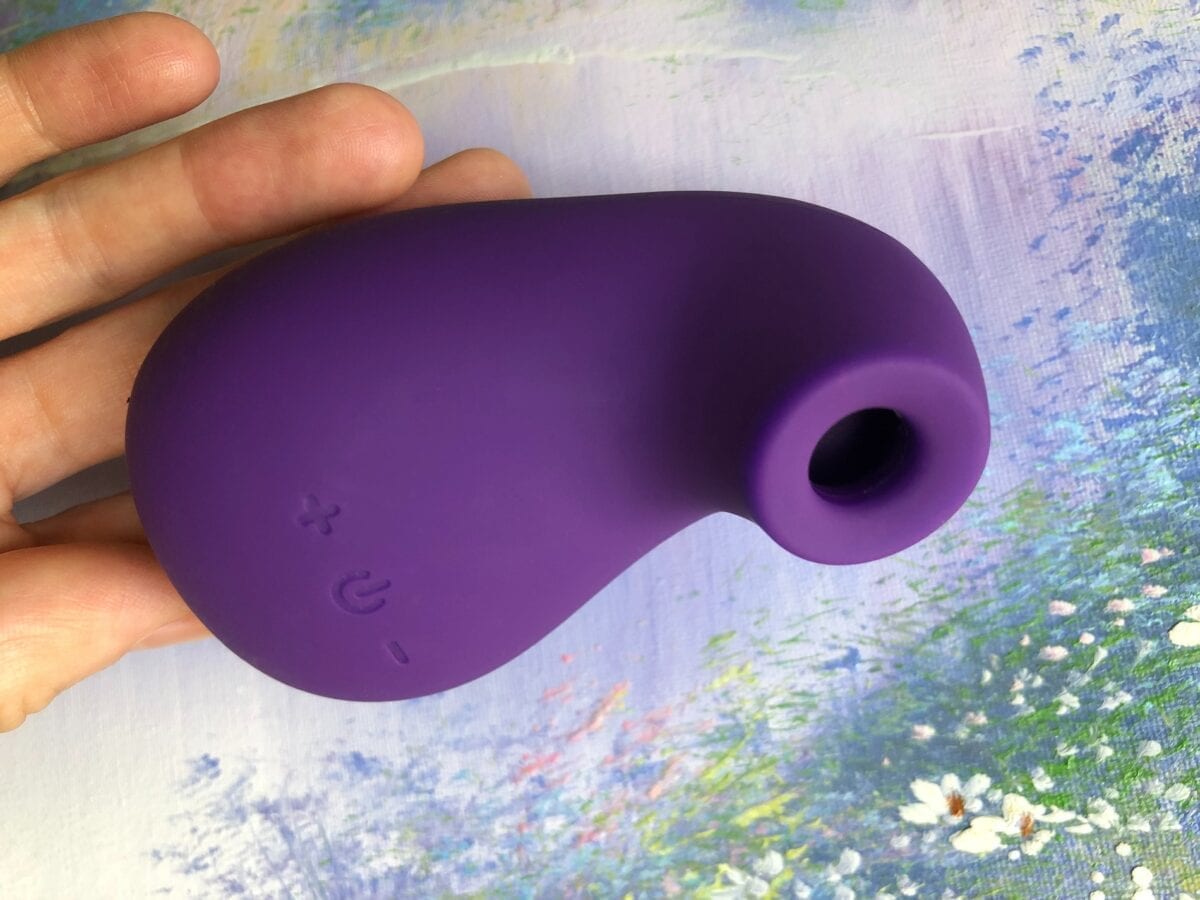