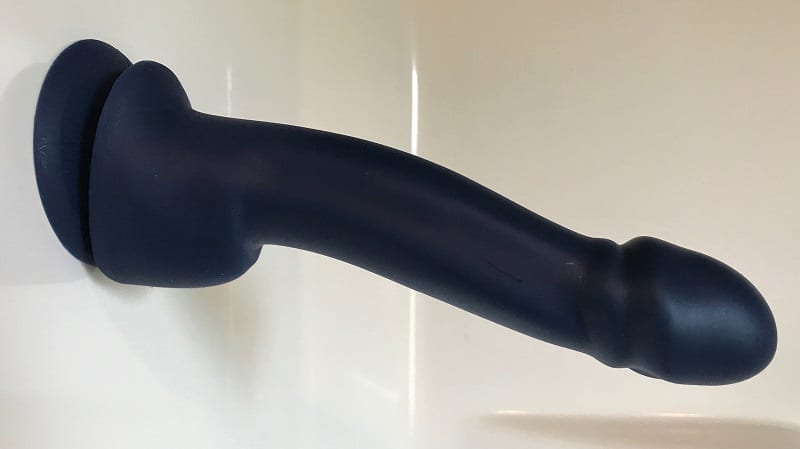 I chose the Sumo out of all the Real Nude options because I’m a sucker for big-headed cocks: the Sumo’s maximum diameter is 2″. Plus, under the coronal ridge, there’s a secondary ridge that I hoped would provide extra stimulation.

But I didn’t realize how much the shaft below those ridges would curve in a wave-like pattern. This bothers me because this mid-shaft rise is preventing my G-spot from receiving the full force of the head when I’m thrusting.2 Also, the outer layer of silicone is so soft that I can’t much feel the second ridge! (I was hoping it would be something like the Tantus Flurry—except larger—but the second ridge might as well not be there.)

2. The Inner Core Is Really Firm

3. The Shaft Is Almost Rectangular

But It’s Not All Bad…

In short, I probably should’ve chosen the Real Nude Ergo (my review here) to test first, because it curves forward, an essential characteristic of G-spotting toys. I’m disappointed that I don’t like the shape of the Sumo’s shaft, because the suction cup is super strong—it stayed attached to my shower wall for twelve hours, until I removed it. If I found it better for thrusting, I’d love to use it as a shower toy. The toy’s longer length (almost 7″ insertable) is perfect for use against a wall.

I really love the squishiness of the Sumo’s head; it’s a great firmness for clenching. This is in fact how I prefer to use the Sumo: with the first three inches inserted, just clenching my vagina around it while barely moving it, while I’m moving a We-Vibe Tango around my clit. The softness of the Sumo’s head when I come is really amazing.

The Real Nude line’s silicone has an interesting finish: it’s shiny and fairly smooth, while still being tacky (but not VixSkin-sticky-tacky). All silicone collects hair/lint/dust, but the Sumo really holds on to these stray particles, so a little extra cleaning is required. This silicone also eats lube, so be sure to have some Sliquid or your preferred water- or oil-based lube on hand. It glides really nicely when well-lubed because it is so slick.

Last Words: Affordable Dual-Density, Just Not the Shape for Me

If this big, squishy, wavy shape sounds like your thing, pick up a Sumo today at SheVibe, or get one at Peepshow Toys here. You can find the whole Real Nude series here.