I may sound like I’m repeating myself here: I said something similar in my Bad Dragon Flint review. And I do still think Flint is a good toy—especially if you want lots of girth but not much length. But…do you see this new Dragon???

That’s right, it’s got scales, plus massive plated ridges down BOTH sides. When I first saw the product listing, all I could think was “it’s SO DRAGON-Y!”

In comparison to Flint, Mr. Hankey’s Dragon has so much usable length for about the same girth (in size small).1 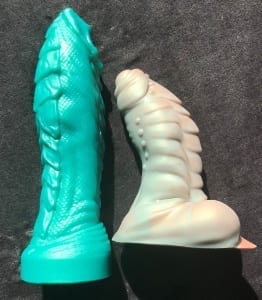 With 8.5″ insertable to its ≈2.4″ maximum diameter, this big green Dragon meets my need for deeper insertion, and then some. (And this is the smallest of four possible sizes with the original: though you can find a new “Xtra-Small” model that’s about 1.8 inches thick here.)

These ridges…phew! After the pointy, flattened head comes what can only be called a coronal ridge—because as fantastical as it is, this Dragon has some definitely cock-like features. The Dragon dildo’s biggest ridge has a small, pointy nub in the middle. In the 75% firmness (about 5-shore silicone), it’s not abrasive exactly, but the very sensitive front wall of my vag finds it a lot some days. 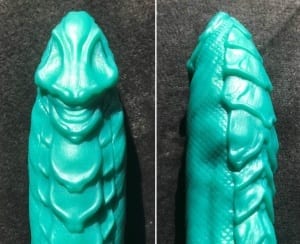 But thankfully, the ridges down the back are gentler. There’s only one set of plates, and no bump in the middle of each. That’s why I enjoy the Dragon so much more when its fiercer front is pressed against the back wall of my vag. I’m able to take more length this way, plus the Dragon’s head lodges deep up between my posterior fornix and my cervix. For me, the cervical stim is comfortably squishy. And best of all, the toy is so thick that my G-spot has nowhere to hide.

When I’m done with the Dragon, getting the toy out is an experience in itself. I haven’t pushed so hard since I last gave birth. If that sounds negative, it’s not meant to be. I love the feeling of bearing down, with all the force of my pelvic muscles, to make this monster get out of me.

I’ve mentioned that my Dragon is in the 75% firmness, which tests around 5-shore silicone. If you’re less sensitive to pressure than me, there’s also the standard firmness (about 9 shore), which isn’t hard but also isn’t really soft.2 I’m very glad I chose the 75% firmness because it is soft, even in this big size, but it’s not super floppy.

Speaking of size, my small is pretty darn big by many people’s standards, though the toy is also now available in the XS series too: that’s 6.5″ insertable length and a max. circumference of 5.75″ (about 1.8″ diameter, so still larger than many “vanilla” toys but not large large). And, if you’re a member of the size royalty, you can get a Dragon in three bigger sizes: medium/large, XL, and (whoa!) XXXL

Another option that I’m glad I requested is the Vac-U-Lock hole. What’s that, you say? Well, it’s a specially shaped hole (duh) that you can use with either: a special adapter to fit a fucking machine, a “knuckles” attachment, or (in theory) a Vac-U-Lock suction cup.3

One of my goals in requesting the hole4 was to see just how wobbly Mr. Hankey’s super-sized dildos would be with the Tantus all-silicone suction cup (which is great because it can be fully sanitized). The answer: pretty wobbly. The problem is, the Tantus suction cup doesn’t expand at the top like the Vac-U-Lock attachments do. So there’s a lot of wiggle room back there. When this setup is stuck to a wall, the Dragon’s weight makes it fall off. But on a smooth horizontal surface (so many options, really), the Tantus suction cup performs OK—not amazingly. When I tried riding the Dragon this way, I could hear a squelching sound with each stroke as the air moved in and out of the hole. It’s a little annoying, but not awful.

If you want a smaller (= “average”) size, also see Dragon in Xtra-Small!