The first thing I realized when testing the Pipedream Fantasy for Her Thrust-Her was that it starts out fast—but it doesn’t go far. The toy’s stroke length is nowhere near as long as that of the Velvet Thrusters by Velvet Cock. Versus their three inches of stroke length, the Thrust-Her goes maybe one inch, tops. That means the thrusting feels less realistic than I personally am looking for.

To be fair, the Thrust-Her’s stroke length is longer than the (considerably more expensive) Stronic Pulsators—whose wiggling-jiggling movement I do love! Though the Stronics’ pulsating motion is pretty darn short, these toys excel because they go so fast and they have impact because of how good the magnetic propulsion system is. (They’re also incredibly easy to hold and comfortably position.) Basically, the Pipedream Thrust-Her’s motor is up against very stiff competition.

The Fantasy for Her Thrust-Her is speedy too. It moves so fast, I had a hard time counting the pulsations of even the first steady speed. I like faster thrusting once I get more aroused, but—just like with the Evolved Novelties Infinite Thrusting Sex Machine—with the Thrust-Her, I wished I could start out a bit gentler. I’d prefer to work up to being pounded at 2 to 3 strokes per second. By the second steady speed, I’ve lost track of how fast the Thrust-Her moves; my guess is that it matches or exceeds the 140 strokes per minute that’s the Velvet Thrusters’ top speed.

And that’s my biggest annoyance about the Pipedream Fantasy for Her thruster overall: the limited number of thrusting speeds. Technically, there are seven of them. BUT—and this is a huge but for me—only two of them are steady, rhythmic speeds. The other five are patterns. I can only adequately express my feelings about the patterns with a guttural noise, something like URGHHH. For most people, patterns in clit vibes are either annoying or just do nothing, and that’s exactly how I feel about patterned thrusting. I want more steady speeds; two just isn’t enough.

Basically, if you’re looking for a toy that thrusts something like a human being might, the Fantasy for Her thruster probably isn’t the one for you. But, if you’re satisfied with short, fairly fast motions—and especially if you think you’d like patterned thrusting!—then this toy may work a lot better.

Besides just thrusting, the Fantasy for Her thruster vibrates. Like the Evolved Thrusting Machine, the thrusting and vibration can happen either together or independent of each other. The Thrust-Her’s first steady vibe pattern is a little rumbly, and the second and third add some buzz with the power. Then come 5 vibration patterns, to match the 5 thrusting patterns. If you (unlike me) are into mixing things up, then add the patterned vibration to the patterned thrusting and make it a two-fer.

Because I usually want more from the Thrust-Her’s thrusting, I’m glad the vibes are there. They give me that push that finally allows me to orgasm. It’s a more complicated process than with the comparably priced Maia Max thruster, whose suction cup is fun too.

The Fantasy for Her Thrust-Her’s silicone is molded into a decidedly nonphallic shape: a straight shaft that widens slightly at the end, with little ribbed lines down both sides of the shaft. I can’t feel the ribbing at all; I find myself wishing it was on the front of the toy so that I might get some G-spot stimulation from it. 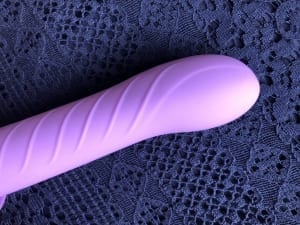 I am happy, though, about the firmness of the silicone; it’s pretty similar to the semi-soft feel of the Velvet Thrusters, but even more satiny. It glides nicely. Unfortunately, it didn’t smell nice when I pulled it out of the box: the Thrust-Her has a lingering smell that only time would remove. Silicone, though functionally nonporous, can and does sometimes absorb odors, and in this case, Pipedream must be using some sort of strong mold-release agent. That’s why it’s important to fully sanitize your sex toys when you first get them out of the package, to remove any factory residue! If you have an especially sensitive nose, then know that this toy is one of the worst out-of-the-box silicone offenders I’ve met. 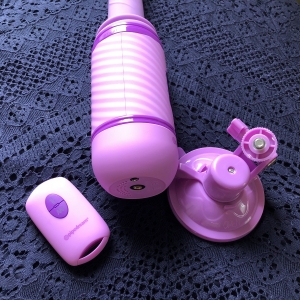 The remote is by far the Thrust-Her’s best extra feature, IMO. It includes two buttons: one for the thrusting speeds and one for the vibes. (If you want to control the heating feature, you’ll need to push the button on the side of the toy instead.) If you’re riding the Thrust-Her, then the remote becomes especially useful, so that you don’t have to reach back and attempt to find the right button on the toy itself. The remote also makes it easier to cycle through the speeds, or to have a partner control your pleasure.

As for the heating feature, well, I couldn’t really feel it. Supposedly it brings the Thrust-Her’s temperature up to 104 degrees Fahrenheit (over 5 degrees above normal body temp.), but I just didn’t notice the difference in use. I once left the Thrust-Her on with only the heating function going for about ten minutes, and after that I could barely feel the warmth in the tip. I think the softer silicone absorbs most of the heat, to be honest. If you’re using your toy in a colder environment (unlike my warm house), then maybe you’ll be able to notice the difference…or not.

And finally, the suction cup! I’m a big fan of suction cup dildos, so this was the Thrust-Her extra that most stood out for me. Really, the suction cup reminds me of the Fleshlight Shower Mount except with a narrow stem and a screw that attaches the toy to the mount (versus a larger, more cupped groove). The Thrust-Her suction cup lets you choose the angle you want, which is super convenient, and it’s also tall enough for me to stick onto my floor and ride—a first for me, because usually my legs get in the way and I can’t get enough length in this position. 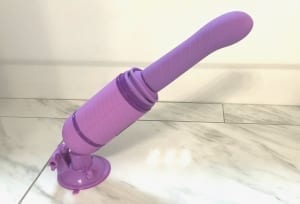 It can be a little tricky to get the Thrust-Her’s base screwed into the suction cup attachment so that the toy’s shaft isn’t turned 90 degrees right or left. But I’ve always gotten it to fit in properly after some adjustment. On a smooth surface, the suction is strong—but the surface does have to be quite smooth: no painted walls. At first I thought the suction was mediocre, but then I realized I wasn’t using the lock/unlock tab on the suction cup, which really locks it into place. On my tiled bathroom floor, the Thrust-Her stayed well.

And UGH, the Name

The cheesiness of the name “Thrust-Her” I can excuse; but the exclusivity of it…meh.

You can find the Pipedream Fantasy for Her Thrust-Her here.