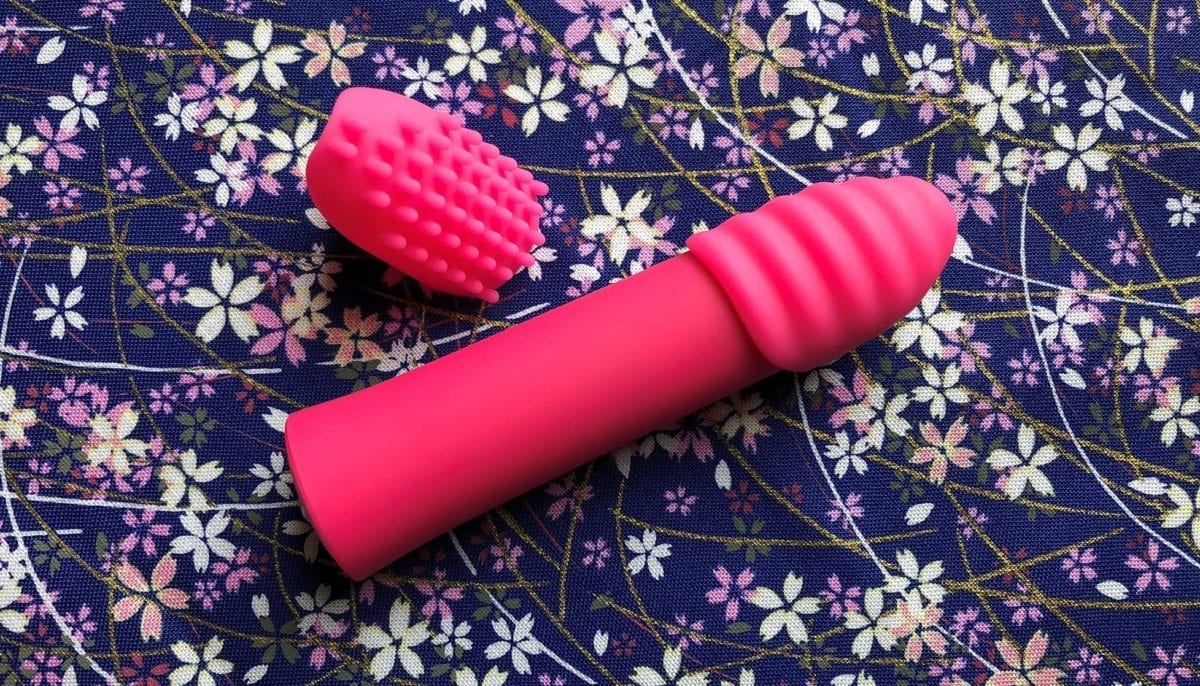 I’d seen people talk about about the Sensuelle Point before—even recommend it as a cheaper alternative to the We-Vibe Tango. (Which means it’s strong, because the Tango holds a legendary status among bullet vibrators.) And the Sensuelle Point Plus is the Point but even stronger—and also improved by the two silicone mini sleeves that come with. It’s those sleeve attachments that made me agree to review this toy. And I like one of them…but I ended up finding an even better use for the Sensuelle Point Plus. 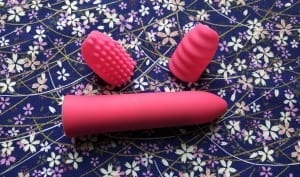 The Sensuelle Point Plus’ first speed is so bracing that I struggled to turn the power down, hoping it was a Vedo Bam–type situation where the vibe intensity starts out high. But no, the Point Plus is just strong through and through. I *think* there are seven steady vibration speeds, but it’s hard to be sure because the middle ones feel so similar. But by the time I turn the vibration up to level 7 or 8, the Point Plus’ power makes me think it’s a cross between an electric toothbrush and a drill.

Like with the Blush Novelties Exposed Nocturnal Bullet, I find myself wishing that I had a pair of soft, cushy gloves to wear when I use the Sensuelle Point Plus. Because you will feel your fingertips tingling for a few minutes after you stop using this vibe, it’s that powerful.

According to the power scale in my Bullet Vibe Comparison Guide, I would give the Sensuelle Point Plus a 10/10 for power, the same as the Blush Exposed Bullet. Both are indeed stronger than the We-Vibe Tango—shockingly enough, given that toy’s stellar reputation. But the Point Plus is a new level of buzzy, surface-level power, like only 2 out of 10 on my “rumbly-ness” scale. The Exposed Bullet’s first setting suddenly seems penetrating, rumbly, by comparison.

And as for the non-steady speeds… Somewhere out there, I expect there must exist a person who enjoys this large number of patterns. More patterns, more variety, more fun—right? In theory, sure. In practice, though… the number of patterns is a crowd. I tried—not once, but twice!—to count just how many there are. But all the pulsing, throbbing sensations ran together about 10 patterns in, and I gave up. To be fair, there are two patterns I remember enjoying—for a limited time, before I decided I needed steady stimulation again. But finding those two, among the vast sea of Point Plus patterns, is truly an exercise in patience.

This pattern-finding exercise was compounded by the fact that I had a couple towels over my pelvis. Whatever for? you might wonder. Well, it may not be loud like a large wand vibe on high power, but the Point Plus’ top speeds do translate into noise.

I’m someone who gets off harder with rubbing motions, rather than constant pressure on my clit, so the silicone sleeves looked like a winner. All that texture to move back and forth! The Point Plus’ two sleeves have very different textures, of course: a gently ridged one that I knew I’d like, and a nubby one that scared me. (Before agreeing to review the toy, I actually asked Peepshow Toys whether the nubby one was permanently attached, as it’s shown on the vibe in all the product photos—but nope, both sleeves are removable.)

These attachments are just the right height, so that they massage my clit but I never think, YIKES why am I doing this to myself? I like the ridgy sleeve’s shape so much that I’ve tried it on my We-Vibe Tango too, and the fit is just a little loose.

As for the second sleeve, the nubby one, I was right—totally not my cup of tea. It’ll be better for folks who like super-pinpoint clitoral stim, but for me it’s poke-y. But, I mean, I could always wear it as some sort of threatening-looking (but Barbie-pink) ring on my index finger if I was so inclined.

The Sensuelle Point Plus stands out for one other reason—besides its strength and attachments. The upright charging base is super convenient because you know your vibe is going to keep charging after you plug it in and walk away—because I’ve seen frequent complaints about magnetic connections, like that of the We-Vibe Tango, suddenly coming detached partway through charging. But with the Point Plus, you just plug the charging cord into the back of the base, stick the vibe’s base in, and a  little blue light comes on so you know it’s working. This is a nice luxury-vibe-type feature that’s usually only found in toys like the We-Vibe Sync or Match. 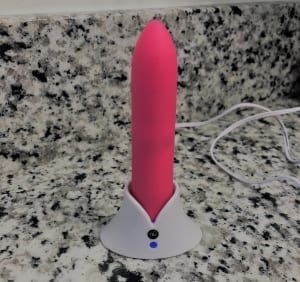 I’m glad for Point Plus’ two-arrow control buttons. Using these, you can go either up or down, so you don’t have to deal with cycling through so many patterns if you only wanna go down one or two steady speeds. It is easy to get “up” and “down” confused, though, because both are a simple triangle. Both these arrows turn on the Point Plus—then, to go up, you push the opposite button of the one you used to start the toy.